The ALS ELISA Assay Kit is For Research Use Only

The Insulin-like Growth Factors (IGF) – I and II are bound to specific binding proteins in circulation (IGFBP). Until today seven different proteins have been identified IGFBP-1 to 7. IGF bioavailablity, transport and storage is regulated or facilitated by these binding proteins which are expressed differentially according physiological and developmental requirements. The most abundant IGFBP in circulation is IGFBP-3. Together with IGFBP-5 it is able to form the so called ternary complex with IGF and the acid-labile subunit (ALS). In the circulation nearly all IGF is bound in this ternary complex and thus not able to cross the endothelial barrier. Only very small amounts of IGF or IGFBP-3 exist outside this complex. The acid-labile subunit is an important part of the IGF-storage mechanism in circulation. In ALS deficiency or in ALS knock-out mice the concentration of IGF and IGFBP-3 in the circulation is significantly decreased resulting in impaired growth.

The acid-labile Subunit, is a synthezised as propeptide of 605 amino acids. The signal peptide, necessary for ALS secretion (AA 1-27) cleaved off enduring the transport process (Swiss-Prot P35858 Version 82). The mature protein consists of 578 amino acids and contains about 20 leucin rich sequence repeats. Beside the leucin-rich repeats several potential N-linked glycosylation sides have been described. Miller BS et al. were able to demonstrate that incomplete glycolsylation of IGFs, ALS and IGFBP-3 results in a decreased serum concentration of these proteins. Oral mannose therapy resulted in a partial normalization of the glycosylation pattern and went along with improved growth. Mutations in or the complete knock out of the ALS gene result in IGF / IGFBP-3 deficiency and therewith in disturbation of growth. Beside growth also other endocrine axes may be involved. In primary ALS deficiency hyperinsulinemia could be observed. Further, the ALS-IGF-IGFBP-system seems to be of relevance in coronary disease.

The first ALS immunoassay was described by Baxter RC in 1990. By this in-house radioimmunoassay it was shown that ALS is present in high concentrations in serum (50µg/mL) of healthy humans. But not detectable in other body fluids like amniotic fluid, cerebrospinal fluid or seminal plasma – in spite of the fact that these body fluids contain high level IGFBP-3.

The Eagle Biosciences ALS ELISA is a so-called Sandwich-Assay. It utilizes two specific and high affinity antibodies for this protein. These antibodies were created by immunization of rabbits with specific peptides as previously described by Khosravi and Stadler [16, 17].

The ALS in the sample binds to the immobilized first antibody on the microtiter plate. The biotinylated second anti-ALS-Antibody binds also to the immobilized ALS. In the following step the Streptavidin-POD-Conjugate binds to the biotinylated antibody and in the closing substrate reaction the turn of the colour will be catalysed, quantitatively depending on the ALS-level of the samples.
Initially the test system was calibrated against an internal serum standard and measurement results were expressed as Mediagnost mU/mL. After successful production of eukaryotic recombinant ALS the calibration was transferred to mass units (see Calibration / Traceability).

Additionally recombinant material was used to quantify the ALS content of the calibrators in mass units. Thorough analysis revealed that 1 mU ALS is equivalent to 5 ng ALS and all previous assay data describing the assay performance were accordingly transferred to ng/mL. 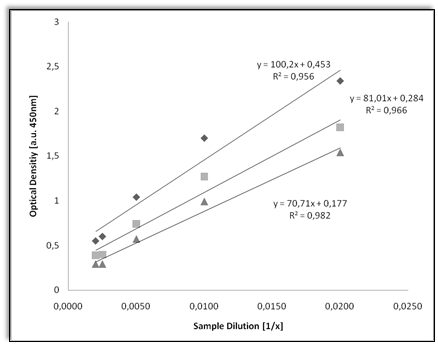