The Resistin ELISA Assay Kit measures human resistin in human serum and plasma samples. The Eagle Biosciences Resistin Assay kit is for Research Use Only.

The Resistin ELISA Assay Kit is For Research Use Only

Resistin, a cysteine-rich protein of 11.3 kDa, was firstly found in mice and constitutes together with RELMα, RELMβ and RELMγ the protein family of resistin-like molecules (RELM).  In humans, resistin and RELMβ but no other proteins of the RELM family were found. The human form of resistin shows a homology of 53% to the murine protein. It has 11 cysteine-residues, is synthesized as a propetide of 108 amino acids and secreted as a dimer, build by a disulfide bridge of cysteine residues. Beside this intermolecular disulfide bridge, 5 additional intramolecular ones exist.

Appearance of multi- and oligomer formation was proved by size exclusion chromatography. Thereby it was shown, that oligomer formation is SDS-insensitive but can be inhibited by β-mercaptoethanol and is therefore likely to be caused by disulfide bridges.  Further on, the resistin structure seems to be dependent on its concentration, as circular dichroism analysis shows a concentration dependent shift of α-helical to β-sheet structure.

Most investigation refers to the mouse model. Here, the existence of trimeric and hexameric resistin in serum was demonstrated. In comparison to adiponectin biology it is highly probable that different resistin oligomers have different biologic function.  In mice, a correlation between adiposity, insulin resistance and resistin expression was found empirically. In humans, respective study results are not clear – several studies show an association of resistin serum concentration and adiposity or insulin resistance. But others failed in confirming these results. Therefore, there is requirement for valid and reproducible determination of resistin serum concentration.
Relevance of resistin in other physiologic processes than energy metabolism was investigated by several different approaches. Experiments with endothelial cells gave interesting results. Here, resistin was shown to enhance expression of VCAM-1 and ICAM-1. By this way, resistin is potentially able to influence endothelial inflammation (35, 36) and, thereby atherosclerosis. These results were confirmed by experiments in mice, where endothelin-1 was shown to regulate resistin secretion.

In recent research human resistin was shown to increase pre-adipocyte proliferation and lipolysis of mature adipocytes. By the way of modulating MAPK-signalling pathways resistin exerts crucial influence on energy metabolism.  This ELISA-kit enables the user to determine the exact concentration of Resistin in human serum/plasma as well as other body fluids and thereby assists investigation of Resistin biology.

The Eagle Biosciences Resistin ELISA Assay Kit is a so-called Sandwich-Assay. It utilizes a specific high affinity polyclonal rabbit antiserum coated on the wells of a microtiter plate. The Resistin in the samples binds quantitatively to the immobilized antiserum. In the following step, the biotinylated antiserum binds in turn to Resistin. After washing, Streptavidin-Peroxidase-Enzyme conjugate will be added, which will bind highly specific to the biotin of the antiserum and will catalyse in the closing substrate reaction the turn of the colour, quantitatively depending on the Resistin level of the samples. 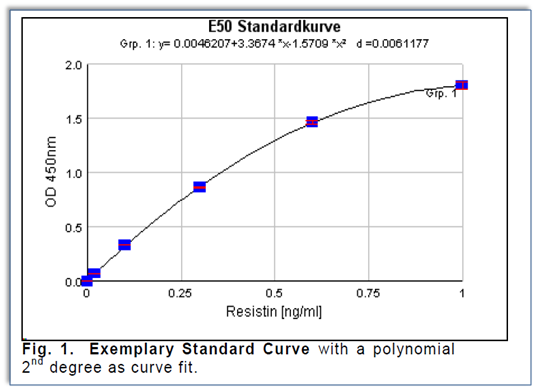