The Rat Fibronectin ELISA Kit is For Research Use Only

Fibronectin (FN) also known as LETS, is identified on the surfFN of fibroblasts by labeling with radioactive compounds or specific antibodies. Fibronectin is a 430,000-dalton dimeric glycoprotein that exists in 2 forms, termed cellular and plasma fibronectin. Cellular and plasma fibronectins are heterodimers consisting of similar but not identical polypeptides. These two forms of FN differ in biologic activity. Fibronectins bind cell surfFNs and various compounds including collagen, fibrin, heparin, DNA, and actin. Because fibronectin stimulates endocytosis in several systems and promotes the clearance of particulate material from the circulation, it could function in the clearance of C1q-coated material such as immune complexes or cellular debris. Fibronectins are involved in cell adhesion, cell motility, opsonization, would healing, and maintenance of cell shape. LETS, encoded on chromosome 8, is responsible for the LETS protein expression in humans. Because LETS has been implicated in tumorigenicity and cellular transformation, it is of interest that rearrangement or modifications in the number of chromosome 8 have been associated with certain forms of cancer. The standard used in this kit is isolated from rat plasma with the molecular mass of 200-250KDa.

The Rat Fibronectin ELISA Kit is a solid phase immunoassay specially designed to measure Rat FN1 with a 96-well strip plate that is pre-coated with antibody specific for FN1. The detection antibody is a biotinylated antibody specific for FN1. The capture antibody is monoclonal antibody from mouse, the detection antibody is polyclonal antibody from goat. The kit contains recombinant Rat FN1 with immunogen: Expression system for standard: from plasma. The kit is analytically validated with ready to use reagents.
To measure Rat FN1, add standards and samples to the wells, then add the biotinylated detection antibody. Wash the wells with PBS or TBS buffer, and add Avidin-Biotin-Peroxidase Complex (ABC-HRP). Wash away the unbounded ABC-HRP with PBS or TBS buffer and add TMB. TMB is substrate to HRP and will be catalyzed to produce a blue color product, which changes into yellow after adding acidic stop solution. The density of the yellow product is linearly proportional to Rat FN1 in the sample. Read the density of the yellow product in each well using a plate reader, and benchmark the sample wells’ readings against the standard curve to determine the concentration of Rat FN1 in the sample. 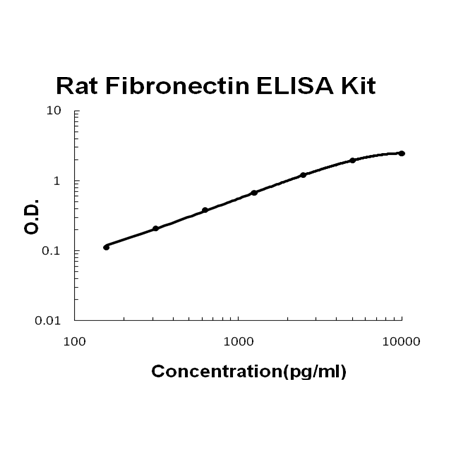