N-terminal proatrial natriuretic peptide (NT-proANP 1-98) is the biologically inactive fragment (98 amino acid) of the ANP prohormone. ANP is translated from its gene as a 151-amino acid precursor, pre-proANP. After removal of the 25-amino acid signal peptide, the tissue form of the hormone, a 126-amino acid proANP (γ-ANP) is generated. γ-ANP is proteolytically cleaved to the biologically active ANP (α-ANP) and to the 98 amino acid NT-proANP peptide (also known as proANP 1-98). The major molecular forms of circulating human ANP is thus the 28 amino-acid peptide (α-ANP) that contains a ring structure with a disulfide bridge and the 98-amino acid NT-proANP peptide, which is easier to detect in the circulation due to its longer half-life. Both peptides α-ANP and NT-proANP circulate in equimolar amounts.
ANP is secreted from the heart in response to atrial stretching or through stimulation by angiotensin II and endothelin. The most important stimulus for the release of the hormone into circulation is stretching of myocyte fibres. On release, the prohormone is split into equimolar amounts of the highly biologically active proANP (99-126), also known as -ANP or ANP, and the N-terminal part proANP (1-98) (also known as NT-proANP) (Nakagawa et al., 2019; Volpe et al., 2015).

NT-proANP is more stable and has a longer half-life (60-120 min) in circulation than ANP which is rapidly cleared from the circulation with a half-life of 3-4 minutes. The natriuretic peptides have a common characteristic biochemical structure that consists of a ring of 17 amino acids and a disulfide bridge between 2 cysteine molecules.

This kit is a sandwich enzyme immunoassay for the quantitative determination of NT-proANP in human serum, EDTA plasma, heparın plasma, cell culture supernatants and urine. The assay has also been validated for rat samples. In a first step, sample and conjugate (sheep anti-human NT-proANP-HRP) are pipetted into the wells of the microtiter strips, which are pre-coated with polyclonal sheep anti-NT-proANP antibody. NT-proANP present in the sample binds to the pre-coated antibody in the well and forms a sandwich with the conjugate. In the washing step all non-specific unbound material is removed. In a second step, the substrate (TMB Tetramethylbenzidine) is pipetted into the wells. The enzyme catalyzed color change of the substrate is directly proportional to the amount of NT-proANP present in the sample. This color change is detectable with a standard microtiter plate ELISA reader. 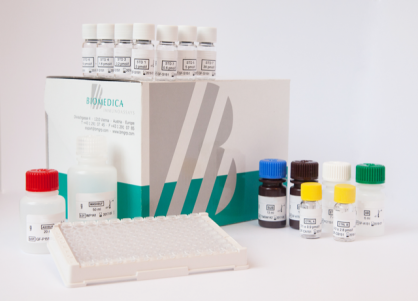