The Dihydrotestosterone (DHT) ELISA Assay Kit is for research use only

5α-dihydrotestosterone (DHT) is a steroid similar to testosterone and androstenedione, which belong to a class called androgens. DHT or Dihydrotestosterone is a C19 steroid and possesses androgenic activity. The bulk of androgen production takes place mainly in the Leydig cells of the testes. Androgens circulate in the blood bound to proteins, especially sex hormone binding globulin (SHBG) and albumin. A trace amount of these steroids circulate in the unbound form in the blood and are referred to as the free fractions. Dihydrotestosterone has at least three times the binding affinity for SHBG than testosterone. In males about 70% of DHT is derived from peripheral conversion of testosterone, while in females most of the Dihydrotestosterone is derived from androstenedione. The major organ to neutralize androgens is the liver. Therefore, in the liver the steroid hormones undergo structural modifications that are generally regarded as prerequisites for their biological inactivation. Some metabolites are formed and some are returned to the circulation before renal excretion. Therefore, elimination of steroids from the body is done through the urine.
Clinical Trends for 5 alpha-dihydrotestosterone:
• In Klinefelter’s syndrome the DHT level is much lower than that found in normal men.
• In idiopathic hirsutism about 40% of the patients have an increased level of DHT.
• In polycystic ovaries (PCO) about 35% of the patients have an increased DHT level.
• The DHT level in young people is much higher than those found in normal older people, hence androgen production increases at puberty which gives rise to masculinizing characteristics. It has been demonstrated that the human testes produce DHT, which appears to originate in the seminiferous tubules. Therefore, in tubular damage the production of DHT is impaired, which causes a decrease in the levels of plasma DHT (patients with germinal cell aplasia and azoospermia).
• There is a very low level of plasma Dihydrotestosterone in patients with anorchia.
• It has been reported that in some prostate cancer (especially in stage D) the determination of DHT could be useful in predicting the response to anti-androgen therapy.

The principle of the following enzyme immunoassay test follows the typical competitive binding scenario. Competition occurs between an unlabelled antigen (present in standards, controls and patient samples) and an enzyme-labelled antigen (conjugate) for a limited number of antibody binding sites on the microplate. The washing and decanting procedures remove unbound materials. After the washing step, the enzyme substrate is added. The enzymatic reaction is terminated by addition of the stopping solution. The absorbance is measured on a microtiter plate reader. The intensity of the colour formed is inversely proportional to the concentration of DHT in the sample. A set of standards is used to plot a standard curve from which the amount of DHT in patient samples and controls can be directly read. 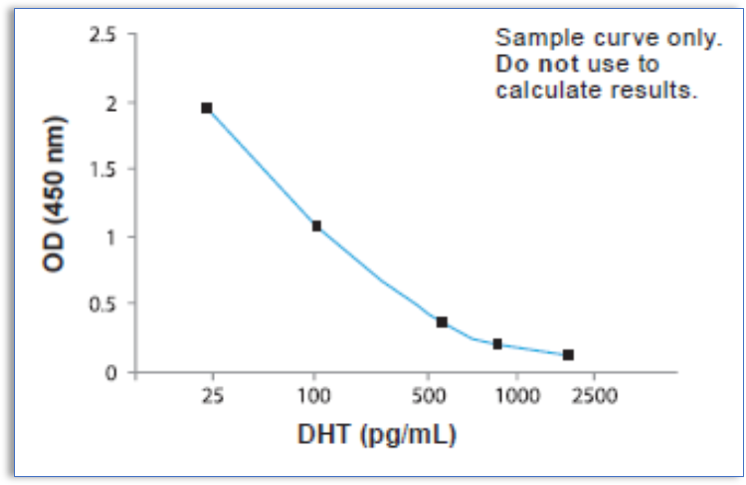