The IGFBP-6 ELISA Assay Kit is for the measurement of human IGFBP-6 in human serum / plasma and other body fluids. The kit is for research use only and not for diagnostic procedures.

The IGFBP-6 ELISA Assay Kit is For Research Use Only

The Insulin-like Growth Factor 6 (IGFBP-6) is part of the IGF-System which consists of several binding proteins (1-6) and IGF-I and –II. The Insulin-like Growth Factors are involved in the control of human growth and regulated themselves by their binding proteins. The IGFBPs show high amino acid sequence homology, they have conserved N- and C-terminal domains which are involved in IGF-binding. In contrast the central linker region is highly variable. This region is not directly involved in IGF-binding but influences stability and localisation of the IGFBP / IGF complex and can be modified by glycosylation and phosphorylation.
IGFBP-6 a protein of 213 amino acids and about 34 kDa is somewhat special because of only three disulphide bridges in the C-terminal domain, resulting in a significantly higher affinity (50fold) for IGF-II than IGF-I. Further IGFBP-6 can be O-glycosylated and is cleaved by cathepsin-D-like acid protease, neutral serine protease as well as MMP-2/-7/-9/-12.
Main proposed function of IGFBP-6 is the regulation of the biological availability of IGF-II and thereby it influences cell proliferation, differentiation, migration and survival. Further IGF-independent as well as intra- and nuclear actions of IGFBP-6 are discussed. IGF-independent actions might be transmitted by prohibitin-2 as a potential cell surface receptor. Physiologically IGFBP-6 might be involved in senescence, angiogenesis and cancer. But a clear clinical indication for measurement of plasma IGFBP-6 needs to be determined (Bach, 2015).

The Eagle Biosciences IGFBP-6 ELISA assay is based on polyclonal antibodies and recombinant IGFBP-6, expressed in eukaryotic cells. This kit for IGFBP-6 is a so-called Sandwich-Assay. It utilizes two specific antibodies of high affinity. First the IGFBP-6 in the sample binds to the immobilized antibody on the microtiter plate. In a two-step sequence, the biotin-conjugated anti-IGFBP-6-Antibody and the streptavidin-peroxidase are bound. Subsequently, the peroxidase catalyzes an enzymatic reaction resulting in a blue coloration. The intensity of the blue color depends on the analyte content of the sample. The reaction is stopped by the addition of stop solution and color intensity (yellow) is quantified by measuring the absorption.
The IGFBP-6 ELISA,allows secure and reproducible measurement of IGFBP-6 in human body fluids and is a suitable tool for the investigation of IGFBP-6 as a biomarker in growth, cancer and bone metabolism. In a preliminary study IGFBP-6 was measured in serum of healthy blood donors and mean concentration of 204 ng/mL was detected (Range: 73-367, n=20). 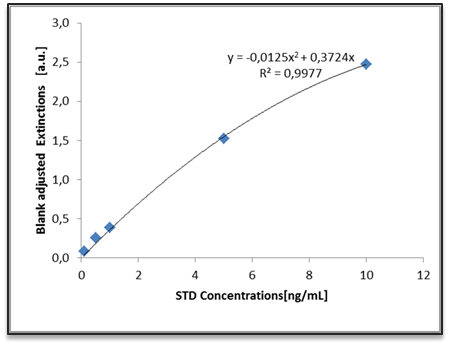 Several commercially available animal sera have been used as samples in the Eagle Biosciences IGFBP-6 ELISA (E112) in a dilution of 1:51 and no significant signal (< STD A) was detected. Thus, this assay cannot be used for IGFBP-6 measurement in serum samples of cat, cattle, chicken, dog, donkey, goat, guinea pig, horse, mouse, pig, rabbit, rat and sheep.