The Golimumab mAb-based ELISA Assay is an enzyme immunoassay for the specific and precise determination of free Golimumab in serum and plasma. The Golimumab ELISA Assay Kit is for research use only and not to be used in diagnostic procedures.

The Golimumab mAb-based ELISA Assay is For Research Use Only

The drug Golimumab (trade name Simponi®) is a human monoclonal antibody that binds to both the soluble and transmembrane bioactive forms of human TNFα. This interaction prevents the binding of TNFα to its receptors, thereby inhibiting the biological activity of TNF. Golimumab has been proven effective in the treatment of Rheumatoid Arthritis (RA), Ankylosing Spondylitis (AS), Psoriatic Arthritis (PsA) or Ulcerative Colitis (UC). Antibodies to Golimumab were detected in 57 (4%) of Golimumab-treated patients across the Phase 3 RA, PsA, and AS trials through Week 24. Similar rates were observed in each of the three indications. Patients who received Golimumab with concomitant Methotrexate (MTX) had a lower proportion of antibodies to Golimumab than patients who received Golimumab without MTX (approximately 2% versus 7%, respectively). Of the patients with a positive antibody response to Golimumab in the Phase 2 and 3 trials, most were determined to have neutralizing antibodies to Golimumab as measured by a cell-based functional assay. The data from the literature demonstrated that Anti-Drug Antibody positivity was significantly associated with low Golimumab levels and poor therapeutic response.

This ImmunoGuide Golimumab ELISA (mAb-based) is developed for the specific measurement of Golimumab in sera, plasma and other biological fluids by the advantage of using a site-directed DWZ-1E4 mouse monoclonal antibody (mAb) specific for Golimumab only.

This Eagle Biosciences ELISA Assay Kit is based on Golimumab-specific mouse monoclonal antibody (catcher Ab, ImmunoGuide clone DWZ-1E4). Diluted standards and samples are incubated in the microtiter plate coated with IG-DWZ-1E4 mAb. After incubation, the wells are washed. A horseradish peroxidase (HRP)-conjugated anti-human IgG monoclonal antibody is added and binds to the Fc part of Golimumab. Following incubation, wells are washed and the bound enzymatic activity is detected by addition of chromogen-substrate. The color developed is proportional to the amount of Golimumab in the sample or standard. Results of samples can be determined by using the standard curve. Binding of Golimumab to the solid phase, pre-coated with DWZ-1E4, is inhibited by recombinant human TNF-a in a concentration dependent manner. Therefore, the ImmunoGuide Golimumab ELISA (mAb-based) measures the free form of Golimumab.

There is no cross reaction with any other proteins present in native human serum. A screening test was performed with 48 different native human sera. All produced OD450/620 nm values less than the mean OD of standard D (6 ng/mL). In addition, binding of Golimumab is inhibited by recombinant human TNF-a in a concentration dependent manner. Therefore, the ImmunoGuide Golimumab ELISA (mAb-Based) measures the biologically active free form of Golimumab, i.e. not pre-occupied by TNF-a. No cross reaction was observed with sera spiked with the other therapeutic antibodies including Infliximab, Adalimumab, Etanercept, Rituximab, Trastuzumab, Tocilizumab, Omalizumab and Bevacizumab at concentrations up to 2 mg/mL. 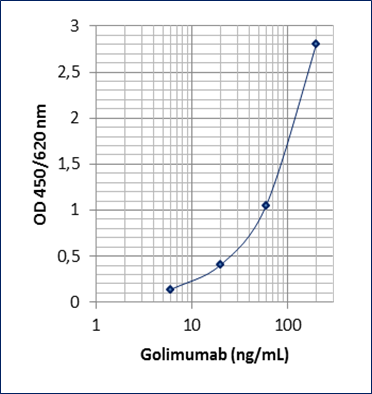