The Leptin Sensitive ELISA Assay is For Research Use Only

Leptin, the product of the ob gene, is a recently discovered single-chain proteohormone with a molecular weight of 16 kD, which is thought to play a key role in the regulation of body weight. Its amino acid sequence exhibits no major homologies with other proteins. Leptin is almost exclusively produced by differentiated adipocytes. It acts on the central nervous system, in particular the hypothalamus, thereby suppressing food intake and stimulating energy expenditure. Leptin receptors – alternatively spliced forms exist that differ in length – belong to the cytokine class I receptor family. They are found ubiquitously in the body indicating a general role of leptin, which is currently not fully understood. A circulating form of the leptin receptor exists which acts as one of several leptin binding proteins. Besides its metabolic effects, leptin was shown to have a strong influence on a number of endocrine axes. In male mice, it blunted the starvation-induced marked decline of LH, testosterone, thyroxine and the increase of ACTH and corticosterone. In female mice, leptin prevented the starvation-induced delay in ovulation. Ob/ob mice, which are leptin deficient due to an ob gene mutation, are infertile. This defect could be corrected by administration of leptin, but not through weight loss due to fasting, suggesting that leptin is pivotal for reproductive functions.

All these actions may, at least in part, be explained by the suppressive effect of leptin on neuropeptide Y (NPY) expression and secretion by neurons in the arcuate nucleus. NPY is a strong stimulator of appetite and is known to be involved in the regulation of various pituitary hormones, e.g. suppression of GH through stimulation of somatostatin, suppression of gonadotropins or stimulation of the pituitary-adrenal axis.

The most important variable that determines circulating leptin levels is body fat mass. Obviously, under conditions of regular eating cycles, leptin reflects the proportion of adipose tissue showing an exponential relationship. This constitutive synthesis of leptin is modulated by a number of non-hormonal and hormonal variables. Stimulators in both rodents and humans are overfeeding, insulin and glucocorticoids. Suppression has been shown for fasting, cAMP and beta-3-adrenoceptor agonists. From these findings it becomes clear that leptin is an integral component of various metabolic and endocrine feedback loops.

Serum leptin levels show a moderate circadian variation with a peak during the night at about 2 a.m. The leptin values at this time are about 30 to 100 % higher than the levels measured in the morning or early afternoon. This variation together with the influence of food intake needs to be taken into account, when blood samples are collected.  This Eagle Biosciences Leptin Sensitive ELISA Assay kit is suited for measuring human leptin in serum or plasma, other biological fluids (e.g. urine or cerebrospinal fluid), and conditioned adipocyte culture media for scientific purposes.

The Eagle Biosciences Leptin Sensitive ELISA is a so-called Sandwich-Assay using two specific and high affinity antibodies. The Leptin in the samples binds to the first antibody coated on the microtiter plate. In the following step the second specific anti-Leptin-Antibody binds in turn to the immobilised Leptin. The second antibody is biotinylated and will be applied in a mixture with a Streptavidin-Peroxidase-Enzyme Conjugate. In the closing substrate reaction the turn of the colour will be catalysed quantitatively depending on the Leptin-level of the samples. 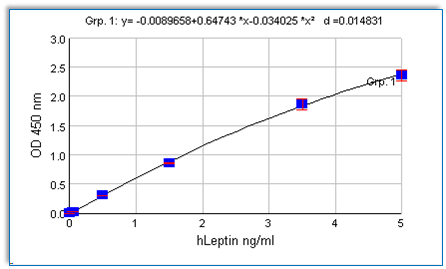