The HHuman High Sensitive IFN-gamma ELISA Assay is to be used for the in-vitro quantitative determination of interferon gamma (IFNγ) in human sera, plasmas, buffered solutions or cell culture media. The assay will recognize both natural and recombinant human IFNγ. The Eagle Biosciences Human IFNγ (Interferon Gamma) ELISA Assay kit is for Research Use Only.

IFNg is considered to be a proinflammatory cytokine, that activates macrophages and endothelial cells, it also regulates immune responses by effecting APC, and T cells.

IFN gamma is a cytokine that is critical for innate and adaptive immunity against viral, some bacterial and protozoal infections. IFN gamma is an important activator of macrophages and inducer of Class II major histocompatibility complex (MHC) molecule expression. Aberrant IFNγ expression is associated with a number of autoinflammatory and autoimmune diseases. The importance of IFNγ in the immune system stems in part from its ability to inhibit viral replication directly, and most importantly from its immunostimulatory and immunomodulatory effects.

Different populations of T-cells secrete differing patterns of cytokines that ultimately lead to different immune responses. IFNγ production is a key function of Th1, CD8+ CTLs and also NK cells. It is a cytokine critical for cell mediated immunity against viral and intracellular bacterial infections and is involved in the inflammatory response following secretion via macrophage activation and stimulation of antibody secretion. IFN is the hallmark effector cytokine of Th1 and therefore is an excellent marker for identifying a host response to intracellular pathogens.

IFN is produced during infection by T cells of the cytotoxic/suppressor phenotype (CD8) and by a subtype of helper T cells, the Th1 cells. Th1 cells secrete IL-2, IL-3, TNFα and IFNγ, whereas Th2 cells mainly produce IL-3, IL-4, IL-5, and IL-10, but little or no IFNγ. IFNγ preferentially inhibits the proliferation of Th2 but not Th1 cells, indicating that the presence of IFNγ during an immune response will result in the preferential proliferation of Th1 cells.

In addition, IFNγ has several properties related to immunoregulation. IFNγ is a potent activator of mononuclear phagocytes, and activates macrophages to kill tumor cells by releasing reactive oxygen intermediates and TNFα. IFNγ induces or augments the expression of MHC antigens on macrophages, T and B cells and some tumor cell lines. On T and B cells IFNγ promotes differentiation. It enhances proliferation of activated B cells and can act synergistically with IL-2 to increase immunoglobulin light-chain synthesis.

The role of IFNγ as a disease marker has been demonstrated for a number of different pathological situations including, viral infection, autoimmune disease, transplant rejection, diabetes and allergy.

The IFNγ Kit is a solid phase sandwich Enzyme Linked-Immuno- Sorbent Assay (ELISA). A monoclonal antibody specific for IFNγ has been coated onto the wells of the microtiter strips provided. Samples, including standards of known IFNγ concentrations and unknowns are pipetted into these wells. During the first incubation, the IFNγ antigen and a biotinylated monoclonal antibody specific for IFNγ are successively incubated.

After washing, the enzyme (streptavidin-peroxydase) is added. All the unbound enzyme is removed by washing and the first amplification step is performed by adding the Biotine-Tyramine reagent. Under the action of HRP, a biotine polymerisation reaction occurs in the region of the HRP linked to the detection antibody. After washing the second amplification step is performed and the polymerised biotine is revealed by a new streptavidin-HRP step. Finally after washing, the substrate is added. The intensity of this coloured product is directly proportional to the concentration of IFNγ present in the samples. 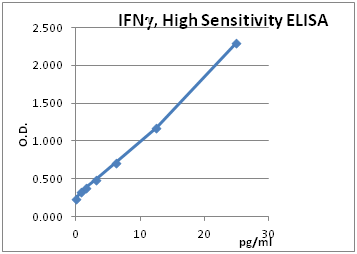 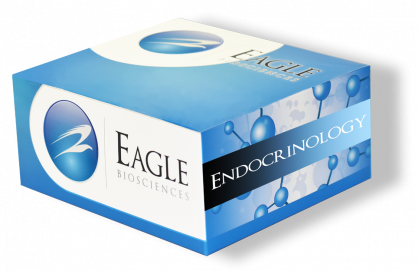