The Human G-CSF ELISA Assay is For Research Use Only

G-CSF is a pleiotropic cytokine best known for its specific effects on the proliferation, differentiation, and activation of hematopoietic cells of the neutrophilic granulocyte lineage. It is produced by activated monocytes/macrophages, fibroblasts, endothelial cells, astrocytes, osteoblasts and bone marrow stromal cells. In addition, various carcinoma cell lines and myeloblastic leukemia cells can produce G-CSF constitutively. G-CSF and G-CSF receptors have also been shown to be produced by placental, decidual and endometrial gland cells during pregnancy, suggesting that G-CSF may play a role in decidual and placental function. Clinical use of G-CSF has been approved for the amelioration of chemotherapy-induced neutropenia as well as for severe chronic neutropenia following bone marrow transplants. Several reviews on G-CSF and its clinical applications have been published.

In humans, two distinct cDNA clones for G-CSF, encoding 207 and 204 amino acid (aa) residue precursor proteins, have been isolated. Both proteins have a 30 aa signal peptide and have identical sequences except for a three amino acid insertion (deletion) at the 35th aa residue from the N-terminus of the mature protein. The 177 aa residue G-CSF, derived from the 207 aa residue precursor, was reported to have a tenfold lower specific activity than the shorter G-CSF isoform. Human G-CSF is 73% identical at the amino acid level to mouse G-CSF and the two proteins show species cross-reactivity.

G-CSF exerts its biological effects through binding to specific cell surface receptors. A single class of high affinity binding sites is present in both human and mouse hematopoietic progenitors and neutrophilic granulocytes. Among nonhematopoietic cells, receptors are also expressed on placental cells, endothelial cells, and various carcinoma cell lines. cDNAs for the human and mouse G-CSF receptors have been isolated. Mature mouse or human G-CSF receptors are single transmembrane glycoproteins of approximately 800 aa residues. The extracellular domain of the G-CSF receptor contains three regions of homology with other cell surface proteins, including an N-terminal immunoglobulin-like region, a structural motif characteristic of the hematopoietic receptor superfamily, and three tandem repeats of the fibronectin type III domain. In humans, four alternative transcripts of the G-CSF receptor gene, encoding a soluble form of G-CSF receptor as well as three transmembrane receptor isoforms have been identified.

The Eagle Biosciences Human Granulocyte Colony Stimulating Factor (G-CSF) ELISA Assay Kit employs the quantitative sandwich enzyme immunoassay technique. A monoclonal antibody specific for G-CSF has been pre-coated onto a microplate. Standards and samples are pipetted into the wells and any G-CSF present is bound by the immobilized antibody. Following incubation unbound samples are removed during a wash step, and then a detection antibody specific for G-CSF is added to the wells and binds to the combination of capture antibody- G-CSF in sample. Following a wash to remove any unbound combination, and enzyme conjugate is added to the wells. Following incubation and wash steps a substrate is added. A colored product is formed in proportion to the amount of G-CSF present in the sample. The reaction is terminated by addition of acid and absorbance is measured at 450nm. A standard curve is prepared from seven G-CSF standard dilutions and G-CSF sample concentration determined. 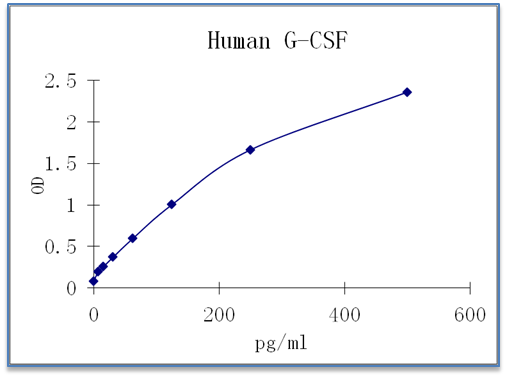 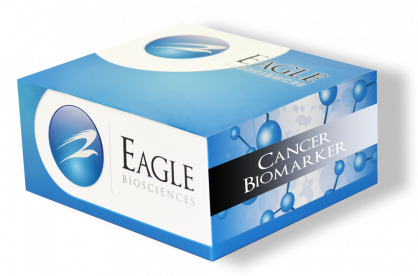