The HtrA1 ELISA Assay Kit is For Research Use Only

Human HtrA1 protease (previously termed PRSS11) was initially identified in human fibroblasts and belongs to the high temperature requirement factor A (HtrA) family of serine proteases that can be distinguished from other serine proteases by sequence homology, by the presence of a trypsin-type protease domain and one or two carboxyterminal PDZ domains and by their oligomeric architecture.

The loss of mammalian HtrA activity is correlated with severe diseases, including arthritis, cancer, familial ischemic cerebral small vessel disease and age related macular degeneration, as well as Parkinson’s disease and Alzheimer’s disease. Epigenetic silencing occurs in various cancers, and the loss of HtrA1 correlates with decreased sensitivity to anticancer drugs and increased cell migration. In addition, overexpression of HtrA1 inhibited proliferation in vitro and tumour growth in vivo. These data suggest that HtrA1 might function as a tumour suppressor.

In the extracellular matrix, HtrA1 cleaves numerous secreted proteins, such as fibronectin, decorin, fibromodulin, aggrecan, type II collagen, biglycan, clusterin, a disintegrin and metalloproteinase domain-containing 9 (ADAM9), vitronectin, α-2-macroglobulin and the amyloid precursor protein fragment Aβ. The degradation of extracellular matrix components and the strong upregulation of HtrA1 in samples from patients implicate HtrA1 in arthritic diseases, in which it might affect the degradation of cartilage as well as inflammation.

It is unknown, how the cellular distribution of HtrA1 is regulated. In addition, little is known about the interaction partners of mammalian HtrAs. It will be important to identify proteins that function as determinants of the cellular localization, substrate specificity and regulation of HtrA proteases.

Prepare reagents and standards as described in the sections above. For assessing serum samples, prepare the standard using the Serum Diluent. Remind that it is necessary to equilibrate the reagents to room temperature before use. 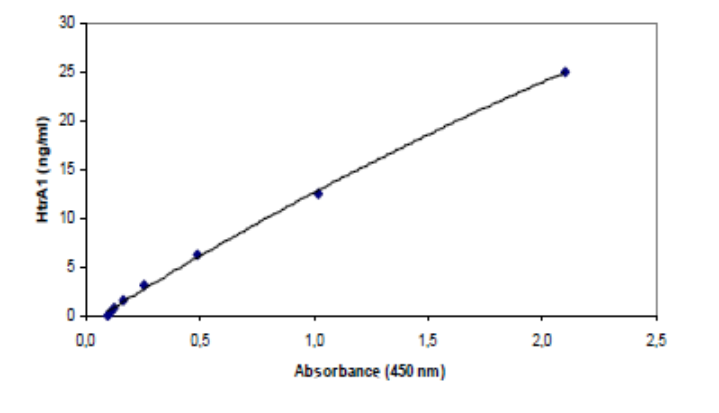