The Aflatoxin B1 ELISA Assay Kit allows the quantitative determination of Aflatoxins in food and feed crop (cereals, nuts, etc.). For further applications the user is encouraged to verify the validity of the tests themselves or contact the manufacturer. The test is easy to use, requires no complex instrumental equipment, and delivers the sensitive results quickly. After a sample preparation to isolate the Aflatoxins, a maximum of 42 samples in duplicate can be tested in 45 minutes with the Aflatoxin B1 ELISA Assay Kit. The sample extraction with methanol/water is described in the following. Alternatively, Aflatoxins can also be isolated with the help of immunoaffinity chromatography.The Aflaxtoxin B1 ELISA Assay Kit is for research use only and not to be used in diagnostic procedures.

The Aflatoxin B1 ELISA Assay is For Research Use Only

Aflatoxins are a type of mycotoxin (toxic mould fungus). They are formed as poisonous metabolites from the Aspergillus (A.) species, such as A. flavus, A. parasiticus, and A. nomius. Aflatoxins enter into the human food chain via contamination of plant-based foods. Grains and oil-containing seeds and nuts, such as corn, rice, peanuts, pistachios, sesame seeds, cotton seeds, dried fruits, spices, and cocoa beans are particularly affected. Climate conditions have a big influence on contamination. Aspergillus species are thus spread particularly in humid regions. Unfavourable harvesting and storage conditions can lead to increased Aflatoxin exposure.

Aflatoxins can cause chronic and acute cases of poisoning. Aflatoxin B1 exhibits the highest toxicity of the discovered Aflatoxins and it is one of the strongest of all the mycotoxins. It has a strong genotoxic and carcinogenic effect, to which the liver is particularly susceptible. In addition to Aflatoxin B1, Aflatoxins G1, B2, and G2 are also amongst important fungi of the group that often occur together. M1 and M2 derivatives which are often found in milk are also important. To protect consumers from illnesses caused by Aflatoxins, there are statutory limits in the European Union for Aflatoxin B1 (2 ppb), as well as for the overall amount of Aflatoxins (4 ppb).

The Eagle Biosciences Aflatoxin B1 ELISA Assay Kit is a competitive enzyme immunoassay. The assay is carried out in a microplate, of which the cavities have already been pre-coated with a special anti-Aflatoxin antibody.

To carry out the assay, Aflatoxin B1 (AFB1) standards and sample extracts respectively and Aflatoxin B1 peroxidase conjugate (AFB1-HRP-conjugate) are pipetted into the cavities. Aflatoxin from the standard or sample now competes with the HRP labelled Aflatoxin for the antibody binding sites. After an incubation period of 30 minutes, unbound components are removed by rinsing them off and then peroxidase substrate solution (3,3’,5,5’-Tetramethylbenzidine, TMB) is pipetted into all cavities. The AFB1-HRP conjugate that is bound to the antibody reacts with the substrate solution by forming a blue colour. After 15 minutes, this reaction is terminated by adding the stop solution. The colour then changes from blue to yellow, which is detected photometrically. With the help of a microplate reader, the yellow colouring is measured as an optical density (OD) at a wavelength of 450nm (reference value 620nm).

The Aflatoxin concentration is inversely proportional to the colour intensity. The higher the OD measurement, the lower is the concentration of Aflatoxin in the standard or sample. 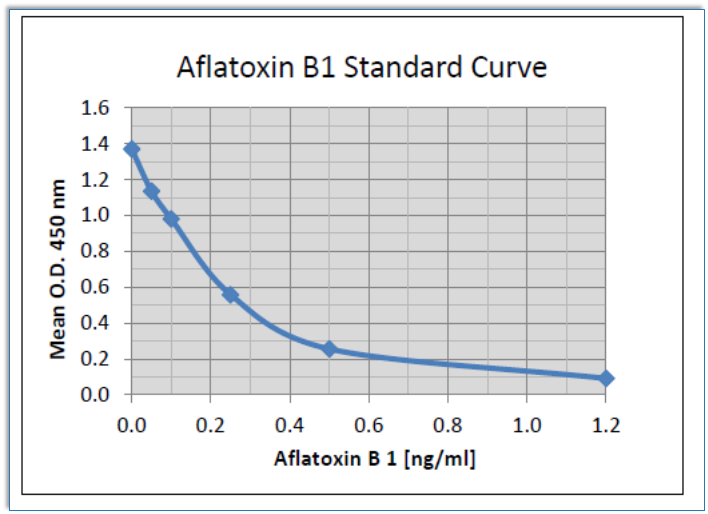